The third and final One Room Challenge™ reveal post is here! It has been so much fun to watch these spaces transform and to have the opportunity to work with such amazing designers. Is anyone else getting a serious itch to renovate their entire house or is that just us? Without further ado… let’s get into the remaining five spaces from the Spring One Room Challenge™!

Starting us off with a bang is Stephen and David of Renovation Husbands! They took on an ambitious project tackling their master bedroom, closet and bathroom spaces. Even more impressive is that they did everything themselves!

What was once a storage space became the master bathroom of their dreams! Their design style flows seamlessly throughout the spaces, making each feel unique yet cohesive all at the same time.

Our shower was to be large, built-in, elegant, and most importantly, intentional. Intentional is [sic] word that we use all of the time when approaching a design – every aspect should look like it was done on purpose.

And intentional it is! Every detail was perfectly executed. Inspired by Sarah of Room for Tuesday, they continued each aspect of the room throughout the shower. Any chair rail, baseboard or crown piece was continued into the shower to create a space space that felt cohesive all the way down to the tile and wood trim pieces.

Stephen and David visited our showroom in Watertown, MA. They were assisted by Leoni, the store’s Assistant Manager: “We had ambitious plans and needed help from someone who was up for the challenge. Thankfully we were paired with Leoni. Leoni knows tile, and she knows what The Tile Shop has to offer. She took all of our questions seriously and provided us with amazing information on the process.”

From the moment they took on this project, Stephen and David knew that marble was the tile they wanted in their shower. They searched for the perfect marble that didn’t have too much yellow, consistent grays and was honed. They ultimately decided on our Firenze Carrara marble which offers beautiful variation making it a highly sought after stone.

They used our Wedi Shower System to easily create their custom shower. Made out of high density foam, the system allows you to easily waterproof your shower and prepare it for tiling!

Its foam is super lightweight and can be cut so much easier than cement board. The entire thing is absolutely brilliant. We will definitely be using the Wedi System again. – Stephen & David

Without a doubt, they achieved the intentional space they set out to create while also creating something pretty beautiful, too! Check out their entire master suite here.

Next up is Steve and Alyssa Terpstra, the husband and wife team that is Coco & Jack. Ever since they moved into this house over three years ago, their master bedroom and ensuite has been on their to-do list, but there always seemed to be a room that took higher priority. This ORC seemed like the perfect time to finally cross it off their list.

Before, their bedroom and ensuite were functional but lacked their personality.

I’ve been thinking about how to redo our space for quite a while, and I really wanted it to feel collected and layered, with an over all neutral colour palette that still has a lot of depth to it. – Steve & Alyssa

Even though their ensuite is a small space, they were able to add a lot of different elements and textures throughout the space. They chose to use a mix of finishes that were both rustic and polished to create interest.

They chose finishes for the shower that would make the space feel open and bright since it is relatively small. For their floor tile, they chose our Claros Silver Travertine for its unfinished and rustic qualities. It contrasts the polished finishes that Steve and Alyssa chose for the rest of the space adding a more casual feel.

They chose to lay the Splendours White Subway tile in a vertical straight stack to make the shower feel taller. Our Splendours tile has gorgeous variation in color and an almost handmade look to it, which adds depth and texture.

It’s all in the details! They added a Hampton Carrara Marble Curb and shelf. It continues the neutral tones grounded throughout the space and gives the shower added functionality and a finished look. Arguably the star of the show, Steve built the aged brass frame for the shower door, which has us all wondering if Steve would build us one!

The Hampton Herringbone Marble mosaic tile adds a subtle pattern and continues the neutral tones from the rest of the space. If they thought their space was functional, it now is not only functional but even more so it is beautiful! Read about their entire One Room Challenge here.

Home Made by Carmona

From start to finish, Ursula Carmona executed each and every part of her bathroom and closet transformation making it a true DIY project. While challenging at times, the spaces that Ursula created are timeless and finally fulfill the plans she has had for the space since she moved in!

While the overall bones of the space stayed the same, you would never believe that these were once the same room!

I wanted to elevate the design in this room to be classy and sophisticated. Just because it’s not the biggest master bathroom doesn’t mean it can’t be loaded with modern luxury. – Ursula

To add a luxe look to this bathroom, I went with a honed Marble floor tile from The Tile Shop, in a herringbone pattern in the center, and a border around the edges. – Ursula

Elements from her closet continue across the hallway and into the bathroom. We are so in love with the wallpaper Ursula used in her closet. It adds the perfect amount of statement while still feeling classic.

There is no question that Ursula created a glam, luxurious bathroom and closet that is centered with classic features. Get all the details on the full spaces on her blog.

Beginning in the Middle

What originally seemed like a relatively straightforward project for Catherine and Bryan of Beginning in the Middle, quickly turned into much more, but are we so obsessed with the end result! For this season of the One Room Challenge, they chose to transform the attic master suite of their parents’ new, old cape cottage. When we say we’re ready to move in, we mean it!

Initially, their plan was to add a bathroom without adding a dormer, but a few weeks in they began to reconsider. Adding the dormer would increase the bathroom space about 50 square feet of space. After a lot of consideration on whether it was worth it paired with the cost and timeline aspects of the challenge, Catherine and Bryan went for it! Now looking back, it made a huge difference.

They chose to use our Firenze Carrara Honed Marble which brings a classic and traditional feel to the bathroom. The grey veining contrasts beautifully off the white walls balancing the entire design.

The floor will primarily be the Firenze Hex tile, and we’ll use the Black Marquina Hex pieces to create the pattern. […] Having just a bit of black mixed with veiny white marble is going to add a really nice splash of contrast to the bathroom. – Catherine & Bryan

With some last minute changes due to COVID-19 and construction delays, there are a few finishing details left to complete the space. Read all about Catherine and Bryan’s 8-week transformation on Beginning in the Middle.

Her first time being a Featured Designer, Kyla, the brain behind House of Hipsters chose to take on her home office and gym. Her office seemed to be a place where furniture gets its chance but never seems to get a permanent spot. Let’s see what Kyla was working with!

It just wasn’t right…again. Being that I spend most of my time in this space, I want it to feel more welcoming and cozy…not cluttered and chaotic. […] More often than not it’s a dumping ground for sourced merchandise waiting to be cleaned, processed, and styled in the shop. – Kyla

A gorgeous space with plenty of natural light, Kyla’s office had great potential. Some fresh floors, new furniture and unique art makes this space truly one of a kind.

It was a last minute idea to add this arch connecting these two spaces and it turns out to be one of Kyla’s favorite details from the space. The Tresana Blanco large-format faux marble tile flows seamlessly in both rooms. It gives the space a glamorous feel without the added care of real marble.

After some thought, Kyla chose to install the Pixel 2 Black Ceramic tile without grout to achieve a cleaner look. We love the contrast between the Pixel 2 Black and the Tresana Blanco floor tile. If only every at-home gym looked this glam!

Here’s a closer look at the black tile. You can see it has a subtle metallic dot pattern that gives the wall some added texture and edginess. – Kyla

If you’ve made it to the end of our part 3 reveals, congrats! We can’t wait for the next season of the One Room Challenge. In the meantime if you’re inspired to start on your own project, let us take the intimidation out of the equation. Make a free appointment to talk about your project, either in the store or with a remote consultation, anytime. Learn more here. 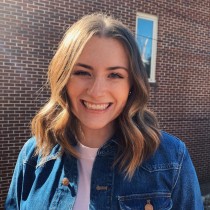 Hi! I’m Sarah, the Social Media Coordinator for The Tile Shop. I’m originally from Wisconsin but live in the Twin Cities as I just graduated from the University of St. Thomas. My favorite part of my job is seeing a project transform from a mood board into a beautiful, completed space. My favorite style is mid-century modern or anything with brass accents. When I’m not posting on The Tile Shop social media, you can find me searching for the best charcuterie board, traveling the world, or having a picnic with friends.